Getting ewes ready to lamb

As January brightens into February, the lengthening of the days is first apparent in the afternoons, both to you and to your Soay sheep. One evening you notice that you are managing to get chores done (and they notice that they have been fed) before it gets really dark. Your ewes have been quietly gestating, the rams having been packed off some time ago. And even though the earliest lambs are six weeks out, lambing season has already arrived. It is time for the preliminaries.

For the first four months, ewes do not show much evidence of their pregnancies, and do not need any increase in their feed. But now, as they begin to round out, be on the lookout for signs that their bodies are telling them that they need to eat more. One thing

to watch for is whether they are doing a better job of cleaning out the feeders, consuming more of the stemmy, less-desirable hay. Another is an increase in their eagerness at chow time, with more pushing, shoving and crowding. We have known ordinarily dignified, well-settled ladies to leap – all four feet off the ground! – and shimmy with anticipation at the sight of the hay man approaching.

We gradually increase the amount of hay we offer, paying close attention to how much they waste and how well they clean up the feeders. We do not want to waste pricey hay but we do want to provide adequate nutrition for our pregnant ewes. At one point, we would also begin to offer small amounts of "ewe-lamb ration." This is an alfalfa-based pelleted feed supplement that we can get from our feed store. Something similar is probably available in your area.

For the last three years, however, we have supplemented with alfalfa hay instead, starting at a ratio of 1 part alfalfa to 10 parts grass hay. For us, this turns out to be less expensive. If you choose to feed alfalfa, be aware that the grade of alfalfa makes a big difference. It is a waste of money to buy alfalfa that is coarse and stemmy; Soay sheep simply can't handle it and it will end up on the ground. Leafy third cutting alfalfa costs more but will not be wasted. At this point we are less concerned with the additional nutrition the ewes receive than we are with making sure their rumens are gradually accustomed to the supplement by the time we need to ramp up their nutrition in response to their lambs' demand for more and more milk.

Try to get a feel for your sheep

It is a good idea to keep tabs on the ewes' body condition, not because they are likely to be losing weight now, but so you will be in a better position to assess their condition later, when they are lactating heavily, and when they are prone to losing body mass. You need to get a feel for your girls, literally, to learn through your fingers how a healthy, well-fed ewe feels, particularly your healthy, well-fed ewes. If they will allow it, you can move quietly behind them as they are lined up at the trough and feel the top of the loin just ahead of the pelvis. If this makes them uneasy and causes them to move away, find an excuse to lure them quietly into a confined area so that you can move among them slowly and gently. You may have to work up to this gradually, but it is worth the effort so that you can stay on familiar terms with your girls and so they will not shy from your touch.

What to feel for

How thick is the meat and padding in the loin area? How much do the spinal processes protrude on top and to the sides? Here, the idea is for your fingers to sense the amount of fleshiness versus boniness, the loin area being the traditional place where this is judged. You can also feel the ribs to assess the amount of fat coverage.

Though you can find diagrams on the web showing how to judge the condition of a sheep, those pictures are of commercial meat sheep, not Soay sheep. You can get an idea of what you are feeling for from these sites, but don't worry about the details. A Soay sheep is a much leaner creature than a Suffolk or other meat breed, and even the fittest Soay ewe is a bag of bones by meat sheep standards. The important thing is to know your own flock, and to be able to monitor any changes in their condition. Compare the feel of your different ewes, and pay attention to the thinner ones. As mentioned above, the biggest danger of under-nutrition is not now, in late gestation, but a month after lambing, when the demands of milk production are so great that many ewes begin to lose muscle mass, because they simply cannot eat enough hay to keep up. The problem is more acute with twin lambs. Now, before lambing, is the time to measure baseline body condition of your ewe flock with your own fingers.

Working the ewes before lambing

One month before the first lamb is expected, we vaccinate our ewes against clostridial diseases and tetanus. By vaccinating now, 30 days ahead of time, we ensure that there will be a good supply of antibodies in the colostrum the lambs will consume in the critical first hours after birth. While we are at it, we also worm, using a product safe for pregnant ewes. Worming at this time cuts down on any parasite load that would tax the ewe during her last month, and cuts down on the number of eggs on the ground that will infect vulnerable lambs who begin to nibble on bits of hay and bedding when only a few days old.

Do all females now

We vaccinate and worm all our ewes – both the expectant mothers and the ewes we didn't breed – at this time. It is easier to be regular about it and get them all taken care of at one go. We do not trim hooves now, though, unless there is a problem to be dealt with. For one thing, there is the late winter mud issue. But more importantly, hoof trimming involves dumping the sheep on her dock, and we would just as soon not subject our pregnant ewes to this indignity. So hoof trims happen on a sunny day in June. That, by the way, is also when we work the rams.

A huge risk to lambs

In our experience,an attack of coccidiosis presents an even bigger threat to survival of a Soay lamb than clostridial diseases, tetanus or worms. We suspect that coccidiosis is the culprit in many cases of lambs who inexplicably weaken and die in the first 12 weeks of life. In part, this is due to the fact that coccidia are less well known and understood, particularly by novice breeders (we got caught unawares, just a few years ago, and lost lambs). And, at least in comparison to worm infestations, the onset of symptoms can be so rapid that the lamb is extremely sick by the time scouring is noticed, diagnosed and treatment begun. Even if the lamb survives, permanent damage to the intestinal tract is a real possibility.

Prevention is way better than treatment

This means treating the ewes with a coccidiostat beginning several weeks before lambing will begin. The treatment doesn't actually kill the parasites, but inhibits the production of oocysts ("eggs") that are normally shed in the feces. It is by ingestion of these oocysts that lambs become infected. The buildup of oocysts on the floors of barns and lambing sheds explains why the last few lambs born are more likely to have problems with coccidiosis. Lambs reared in the pasture, particularly dry pasture, are at much less risk. But for most of us, lambs are born and reared in some form of confinement – barns or shelters – where conditions are ideal for an outbreak.

Commonly used coccidiostats include Deccox (decoquinate) and Bovatec (lasalocid). We mix a measured amount (so much per pound of ewe) of decoquinate with softened beet pulp pellets and offer it to the ewes once a day, continuing the treatment until each ewe has lambed. Frankly it's a bit of a pain to soak the pellets 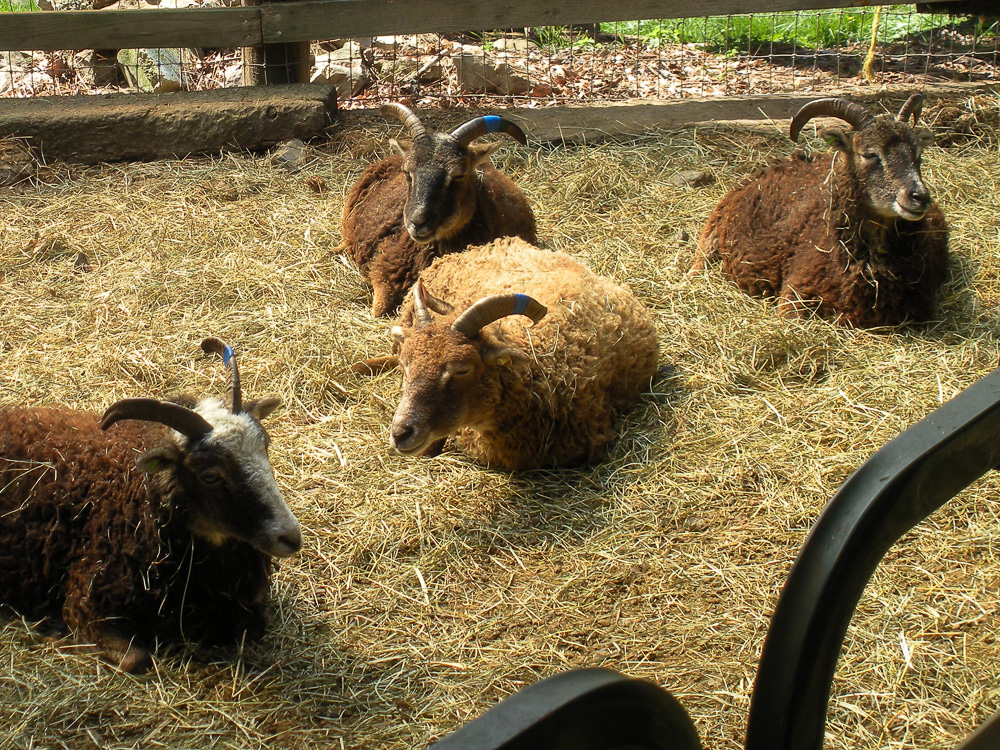 overnight and then to mix in the coccidiostat in the morning. Some people mix the coccidiostat with salt or sheep mineral, much easier in principle. We may yet try this, but our concern is making sure that each ewe actually consumes enough of the stuff. Beet pulp they gobble down with enthusiasm, once they get used to it. We are less confident about the dosing of the coccidiostat when it is offered free-choice in their mineral.